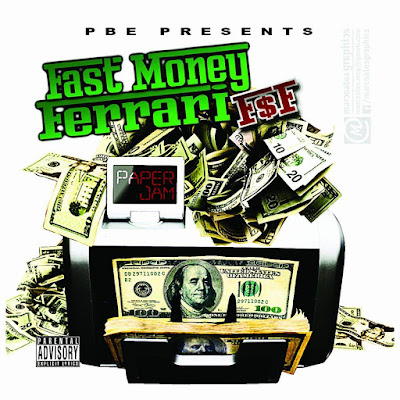 "Cause I'm the best you never had, and the best you'll ever have, your exes gone be mad, and the ones after that."
--Fast Money Ferrari
Tonight ft. Tha Kidd CT & Whitney Jones

Up and coming St. Petersburg artist Fast Money Ferrari doesn't shy far from his name sake as he raps about money, making moves, and over coming strife in his mixtape "Paper Jam. Produced by Shawty T and Hosted by DJ Beelow (both of St.Petersburg), the tape has been out in the streets for almost a year now and is a 9 track project with features from the likes of Kidd CT, Denero and DJ Spitta to name a few. Each song has a different vibe and the production varies. The track "Kush Kandy" incorporated solid verses and a slow chopped and screwed vibe that gives you that chill vibe you would want if you indulge in the herbal. I do feel like he should have really thought about song placement a bit some songs seemed they didn't fit where they were but other than that, I am interested to see what else he does in the near future. If I had to choose a few tracks that I'm rocking with, they would have to be "Bad B.*tch" ft. Denero, "Paper Jam", and "Nothin' To Prove" ft. Mic Jones. "Bad Bitch" is that song you wanna hear to get the crowd hype. It's a shame its so far down the track list that you might not get to experience it unless you make it through all his street tracks that smother the being half of the mixtape. "Paper Jam" is tough and is a great introduction to the mixtape. "Nothin To Prove" is that anthem that you need to uplift you when you feel like you out here alone and need to find your inner beast. I am not disappointed in the product in which Fast Money Ferrari has presented but I would have liked to see maybe a few more songs and better song placement.  Given he is new and trying to build his body of works up I am confident that Fast Money Ferrari will continue to grow as an artist. 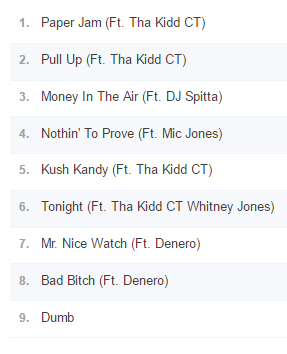