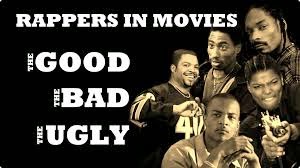 I know everybody and they cousin have seen all four “House Parties” on more than one occasion and I can think back to several other movies that featured rappers and well known urban musicians. Though majority of them are urban films they we're still movies that not only showcased urban living and realistic scenarios but featured rappers that were trying to add more to their resume by crossing over into film. It was often what I like to call a “Hood Movie” or something with a compelling story involving emphasis on urban street life. One of the first movies I saw that featured a well-known rapper and was also set in an urban setting was John Singleton’s 1991 film “Boyz N The Hood”. Ice Cube who played doughboy, the older brother to a high school football star lived a quite different life from his superstar brother that involved toting guns and playing costar to Cuba Gooding Jr. was probably a big test since he was the “gangsta rapper” straight outta Compton. I thought he did an amazing job and he went on to do “Higher Learning in 1995 under Singleton’s direction. John Singleton went on to direct movies that had Tupac, Ludacris, Andre 3000, Tyrese, and Janet Jackson all as main or supporting roles. As this particular entry has been sitting in drafts for well over two weeks, when I first came up with this piece I was just so happening watching “ 21 Jump Street 2” and it featured Ice Cube once again but “Ladies First” hip hop lyricist Queen Latifah co stared with him as the parents of Jonah Hill’s on again off again girlfriend. This wouldn’t be the first time these two have co stared together. Think back to “Barber Shop 2” and even before then Queen Latifah had racked up a consider amount of movie stardom because of her role in the movie “Set It Off” starring alongside Jada Pinkett Smith, Kimberly Elise, and Vivica A. Fox. She was bad ass Cleo making dikes look cool before it was such a thing as to call a butch woman a dike.  That has to be my most noted movie for her and she really played the character. Had I not known she was a Hip Hop artist I would have thought she was a great actress. She later did a movie with rapper Common called “Just Wright” and it really show cased how far as an actress she had come. The same with Ice Cube if it had not been for that pivotal moment when he went from gang banger to college student, to an instant family man in the movie “Are We There Yet” we wouldn’t know that music artist had the potential to crossover and really sell to an entire different market of people.

I think the one musician that stands out the most is J. Lo in “Selena” I am already a sucka for biopics and would love to acquire an extensive movie collection of all my favorites but when J.Lo did that film I felt like she had really embodied Selena. Looking back over old performances of Selena and how she performed, even down to the look. It is apparent that J.Lo took that script home, read over it, did stupid research and really got into who Selena was. Every time I watch the movie I am captivated. I think it’s always a plus when they find artist to play another artist in a movie. It’s like their paying homage to the person and I really appreciated that about “Selena” I cry every time I see that shooting scene and then they go to Madison Square Garden and all the fans are there. I have been tearing up since I was 7 years old on that same part and it isn’t because it’s sad it’s because J.Lo played that role so well I felt like I was one of those Mexican fans that had seen what Selena had given the world she was an amazing artist and really did amazing things with her talent, not only by breaking barriers for other Latin artist but by being genuine to herself as a person and artist. J.Lo though she was Jenny from the block she had crossed over even more after that movie and went on to be a maid, wedding planner, an abused spouse and countless other roles.

Then you have to think about the artist that decided to do it themselves and extend their business of music into learning how movie production works some now even executive producing movies and television shows. I think it is refreshing to see artist not be limited to just music. It shows versatility and shows that they aren't a one trick pony. The next time you watch an old urban classic see how many musically inclined actors you come across. You might be surprised to even realize that you've even missed a few.